The French bulldog business is booming for Jaymar Del Rosario, a breeder whose puppies can sell for tens of thousands of dollars. When he leaves the house to meet a buyer, his checklist includes veterinary paperwork, a bag of puppy kibble and his Glock 26 pistol.

“If I don’t know the area, if I don’t know the people, I always carry my handgun,” Del Rosario said on a recent afternoon as he displayed Cashew, a 6-month-old French bulldog of a new “fluffy” variety that can fetch $30,000 or more.

With their perky ears, their please-pick-me-up-and-cradle-me gaze and their short-legged crocodile waddle, French bulldogs have become the “it” dog for influencers, pop stars and professional athletes. Loyal companions in the work-from-home era, French bulldogs seem always poised for an Instagram upload. They are now the second-most-popular dog breed in the United States after Labrador retrievers.

Some are also being violently stolen from their owners. Over the past year, thefts of French bulldogs have been reported in Miami, New York, Chicago, Houston and — especially, it seems — across California. Often, the dogs are taken at gunpoint. In perhaps the most notorious robbery, Lady Gaga’s two French bulldogs, Koji and Gustav, were ripped from the hands of her dog walker, who was struck, choked and shot in last year’s attack on a Los Angeles sidewalk. The price of owning a Frenchie has for years been punishing to the household budget — puppies typically sell for $4,000 to $6,000 but can go for multiples more if they are one of the new, trendy varieties. Yet owning a French bulldog increasingly comes with nonmonetary costs, too: The paranoia of a thief reaching over a garden fence. The hypervigilance while walking one’s dog after reading about the latest abduction.

For unlucky owners, French bulldogs are at the confluence of two very American traits: the love of canine companions and the ubiquity of firearms.

On a chilly January evening in the Adams Point neighborhood of Oakland, California, Rita Warda was walking Dezzie, her 7-year-old Frenchie, not far from her home. An SUV pulled up and its passengers exited and lunged toward her.

“They had their gun and they said, ‘Give me your dog,’” Warda said.

Three days later, a stranger called and said she had found the dog wandering around a local high school. Warda is now taking self-defense classes and advises French bulldog owners to carry pepper spray or a whistle. Jaymar Del Rosario shows the Glock handgun he carries when he goes out with his French bulldogs, in Elk Grove, Calif., on May 18, 2022. (Jim Wilson/The New York Times)

Warda says she does not know why Dezzie’s abductors gave him up but it could have been his advanced age: Frenchies have one of the shortest life spans among dog breeds, and 7 years old was already long in the tooth.

In late April, Cristina Rodriguez drove home from her job at a cannabis dispensary in the Melrose section of Los Angeles. When she pulled up to her home in North Hollywood, someone opened her car door and took Moolan, her 2-year-old black and white Frenchie.

Rodriguez said she did not remember many details of the theft. “When you have a gun at your head, you kind of just black out,” she said.

But footage from surveillance cameras in her neighborhood and near the dispensary appear to indicate that the thieves followed her for 45 minutes in traffic before pouncing.

“They stole my baby from me,” Rodriguez said. “It’s so sad coming home every day and not having her greet me.”

It is uncertain how prevalent thefts of French bulldogs are nationally, and some local law enforcement agencies said they don’t keep a running count of these particular crimes.

Patricia Sosa, a board member of the French Bull Dog Club of America, said she was not aware of any annual tally. Social media groups created by Frenchie owners are often peppered with warnings. If you own a Frenchie, says one post on a Facebook group dedicated to lost or stolen French bulldogs, “do not let it get out of your sight.”

Sosa, who has a breeding business north of New Orleans, said the lure of profiting from the French bulldog craze had also spawned an industry of fake sellers demanding deposits for dogs that do not exist.

“There are so many scams going on,” she said. “People think, ‘Hey, I’ll say I have a Frenchie for sale and make a quick five, six, seven thousand dollars.’” Sosa said breeders were particularly vulnerable to thefts. She does not give out her address to clients until she thoroughly researches them. “I have security cameras everywhere,” she said.

French bulldogs, as the name suggests, are a French offshoot from the small bulldogs bred in England in the mid-1800s. An earlier iteration of the Bouledogue Français, as it is called in France, was favored as a rat catcher by butchers in Paris before becoming the toy dog of artists and the bourgeoisie, and the canine muses that appeared in works by Edgar Degas and Henri de Toulouse-Lautrec.

Today, the American Kennel Club defines French bulldogs as having a “square head with bat ears and the roach back.”

In the world of veterinary medicine, Frenchies are controversial because their beloved features — their big heads and bulging puppy dog eyes, recessed noses and folds of skin — create what Dan O’Neill, a dog expert at the University of London’s Royal Veterinary College, calls “ultra-predispositions” to medical problems.

Their heads are so large that mothers have trouble giving birth; most French bulldog puppies are delivered by cesarean section. Their short, muscular bodies also make it hard for them to naturally conceive. Breeders typically artificially inseminate the dogs.

Most concerning for researchers like O’Neill is the dog’s flat face, which can belabor its breathing. French bulldogs often make snoring noises even when fully awake, they often tire easily and they are susceptible to the heat. They also can develop rashes in their folds of skin. Because of their bulging eyes, some French bulldogs are incapable of a full blink.

O’Neill leads a group of veterinary surgeons and other dog experts in the United Kingdom that urges prospective buyers to “stop and think before buying a flat-faced dog,” a category that includes French bulldogs, English bulldogs, Pugs, Shih Tzus, Pekingese and Boxers.

“There’s a flat-faced dog crisis,” O’Neill said. French bulldogs, he concluded in a recent research paper, have four times the level of disorders of all other dogs.

These pleadings and warnings have not stopped French bulldogs from rocketing in popularity, propelled in large part by social media. As in the United States, the French bulldog in Britain has been neck and neck with the Labrador for the title of most popular breed in recent years. 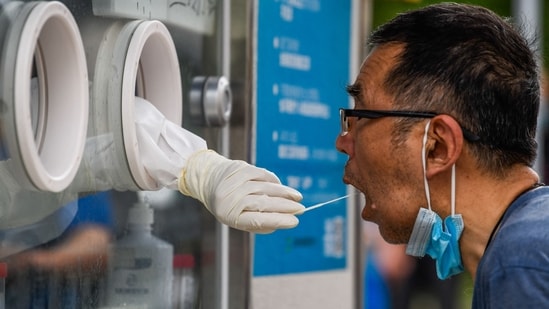