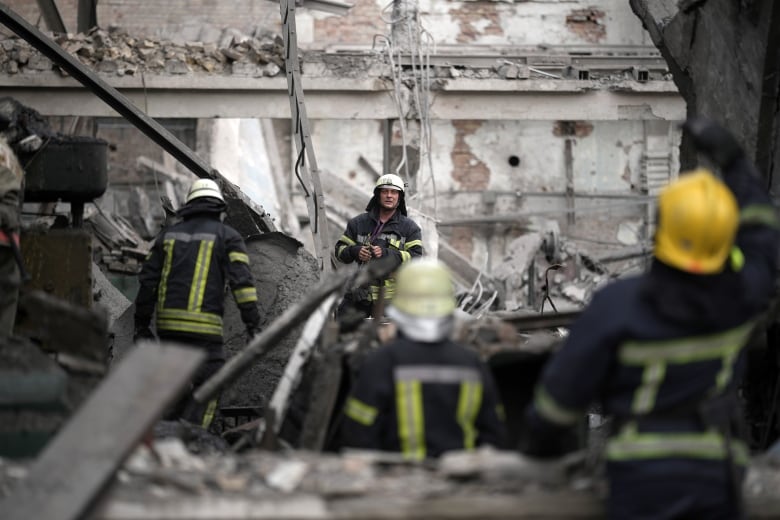 Russia launched airstrikes on Kyiv that it claimed destroyed tanks donated from abroad on Sunday as President Vladimir Putin warned that any Western deliveries of long-range rocket systems would prompt Moscow to hit “objects that we haven’t yet struck.”

Ukraine’s General Staff said Russian forces fired five X-22 cruise missiles from the Caspian Sea toward the Ukrainian capital, and one was destroyed by air defences. Four other missiles hit “infrastructure facilities,” but Ukraine said there were no casualties.

A billowing pillar of smoke filled the air with an acrid odour in Kyiv’s eastern Darnystki district over the charred, blackened wreckage of a warehouse-type structure. Soldiers blocked off a nearby road leading toward a large railway yard.

Nuclear plant operator Energoatom said one cruise missile buzzed close to the Pivdennoukrainsk nuclear plant, 350 kilometres to the south, and warned of the possibility of a nuclear catastrophe if even one missile fragment hit the plant.

Ukraine’s railway authority subsequently led reporters on a guided tour of a rail car repair plant in eastern Kyiv that it said was hit by four missiles. The authority said no military equipment had been stored there, and Associated Press reporters saw no remnants of any in the facility’s destroyed building.

“There were no tanks, and you can just be witness to this.” said Serhiy Leshchenko, an adviser to the Ukrainian president’s office.

However, a government adviser said on national TV that military infrastructure also was targeted. AP reporters saw a building burning in an area near the destroyed rail car plant. Two residents of that district said the warehouse-type structure that billowed smoke was part of a tank-repair facility. Police blocking access to the site told an AP reporter that military authorities had banned the taking of images there.

Before Sunday’s early morning attack, Kyiv had not faced any such Russian airstrikes since the April 28 visit of United Nations Secretary-General Antonio Guterres.

The attack triggered air-raid alarms and showed that Russia still had the capability and willingness to hit at Ukraine’s heart, despite refocusing its efforts to capture Ukrainian territory in the east.

In a television interview that aired Sunday, Putin lashed out at Western deliveries of weapons to Ukraine, saying they aim to prolong the conflict.

“All this fuss around additional deliveries of weapons, in my opinion, has only one goal: to drag out the armed conflict as much as possible,” Putin said. He insisted such supplies were unlikely to change the military situation for Ukraine’s government, which he said was merely making up for losses of similar rockets.

If Kyiv gets longer-range rockets, he added, Moscow will “draw appropriate conclusions and use our means of destruction, which we have plenty of, in order to strike at those objects that we haven’t yet struck.”

The Russian leader’s cryptic threat of a military escalation did not specify what the new targets might be, but it came days after the United States announced plans to deliver $700 million US of security assistance for Ukraine. Those weapons include four precision-guided, medium-range rocket systems, as well as helicopters, Javelin anti-tank systems, radars, tactical vehicles and more.

Military analysts say Russia hopes to overrun Ukraine’s embattled eastern industrial Donbas region, where Russia-backed separatists have fought the Ukrainian government since 2014, before any U.S. weapons that might turn the tide arrive. The Pentagon said last week that it will take at least three weeks to get the U.S. weapons onto the battlefield.

The U.S. has stopped short of offering Ukraine longer-range weapons that could fire deep into Russia. But the four medium-range High Mobility Artillery Rocket Systems in the security package include launchers on wheels that allow troops to strike a target and then quickly move away — which could be useful against Russian artillery on the battlefield.

The Spanish daily El PaÍs reported Sunday that Spain was planning to supply anti-aircraft missiles and up to 40 Leopard 2 A4 battle tanks to Ukraine. The Spanish defence ministry did not comment on the report.

Also on Sunday, Britain said it will supply Ukraine with multiple-launch rocket systems that can strike targets up to 80 kilometres away. It added Ukrainian troops will be trained on how to use the M270 launchers in the U.K.

Elsewhere, Russian airstrikes in Druzhkivka destroyed buildings and left at least one person dead, a Ukrainian official said Sunday. Residents described waking to the sound of missile strikes, with rubble and glass falling down around them.

“It was like in a horror movie,” Svitlana Romashkina said.

Druzhkivka is located in the Donetsk oblast, which along with neighbouring Luhansk make up the Donbas, a contested eastern region of Ukraine home to Moscow-backed separatists and where Russia is waging a major offensive.

The Russian Defence Ministry said air-launched precision missiles were used to destroy workshops in the Donetsk region, including in Druzhkivka, that were repairing damaged Ukrainian military equipment.

Donetsk Gov. Pavlo Kyrylenko urged residents to leave, saying on Facebook that ruined buildings can be restored but “we won’t be able to bring back the lives lost.”

In recent days, Russian forces have focused on capturing Severodonetsk and Lysychansk, two key cities in Luhansk. On Sunday they continued their push, with missile and airstrikes on cities and villages in the Donbas.

In the Donetsk cities of Slovyansk and Bakhmut, cars and military vehicles were seen speeding into town Sunday from the direction of the front line. Dozens of military doctors and paramedic ambulances worked to evacuate civilians and Ukrainian servicemen, and a hospital was busy treating the injured, many hurt by artillery shelling.

On Sunday morning, Ukraine’s General Staff accused Russian forces of using phosphorus munitions in the village of Cherkaski Tyshky in the Kharkiv region. The claim couldn’t be independently verified.

The statement also said Russian forces continue assault operations in Severodonetsk. The Russians control the eastern part of the city, the update said, and are focusing on trying to encircle Ukrainian forces in the area and “blocking off main logistical routes.”

The U.K. military said in its daily intelligence update that Ukrainian counter-attacks in Severodonetsk were “likely blunting the operational momentum Russian forces previously gained through concentrating combat units and firepower.”

Russian forces previously had been making a string of advances in the city, but Ukrainian fighters have pushed back in recent days. The statement also said Russia’s military was partly relying on reserve forces of Luhansk separatists.

Meanwhile, Ukrainian authorities said Ukraine and Russia exchanged bodies of killed troops, in the first officially confirmed swap. Ukraine said Saturday that each side had exchanged 160 bodies two days earlier on the front line in the southern Zaporizhzhia region. 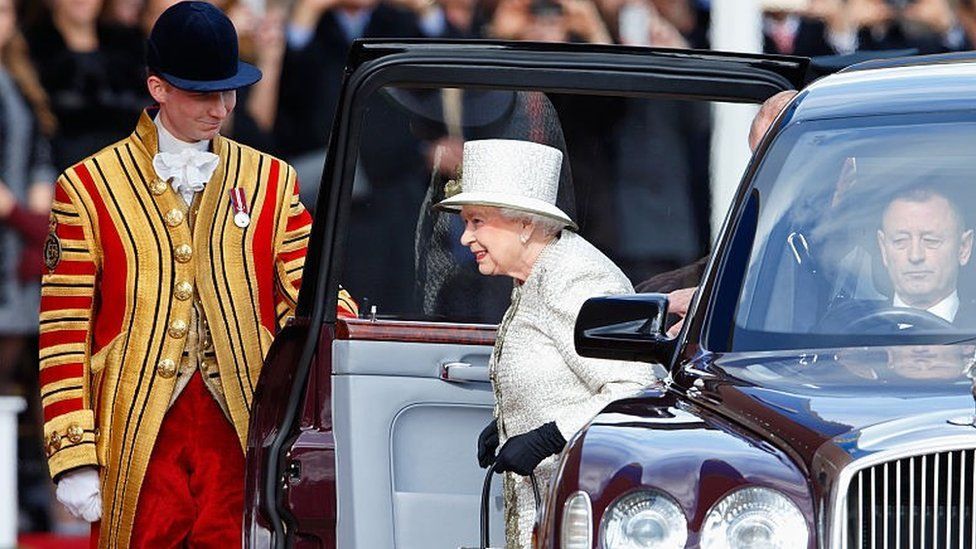 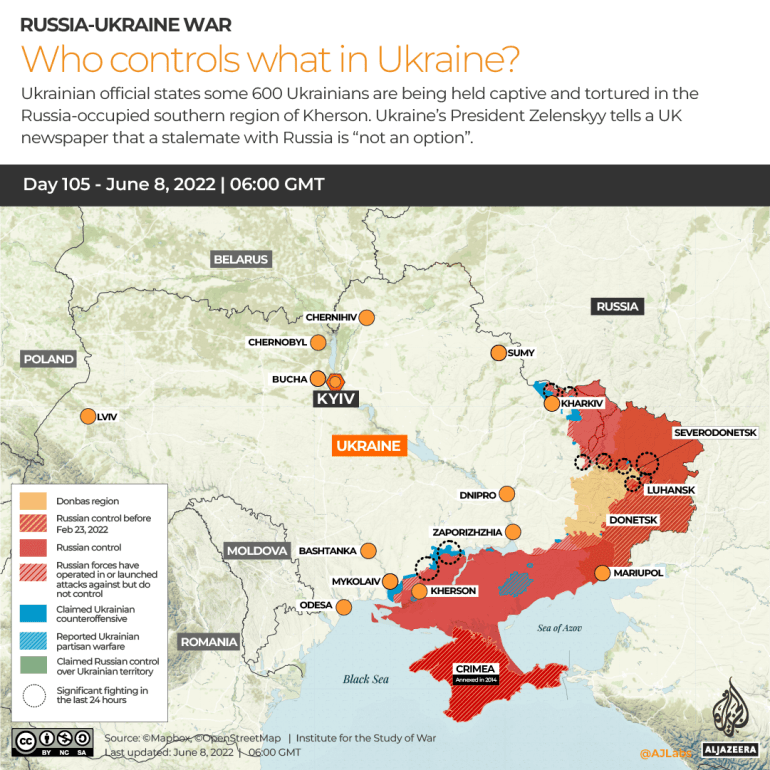